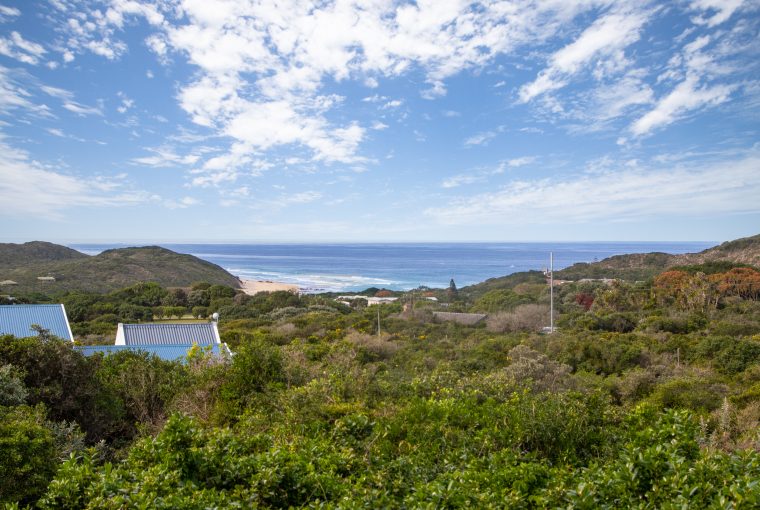 The scenic view from a three-bedroom home for sale in Kenon on Sea, priced at R2.7 million through Pam Golding Properties and typical of the kind of home purchased by retirees or a leisure buyer.

Said to have the highest number of sunny days in South Africa, the Eastern Cape coastal region – or Sunshine Coast – is seeing a continued influx of home buyers acquiring property with a view to retirement either now or in the not-too-distant future, reports Pam Golding Properties.

The company says value for money coupled with peaceful, scenic locations away from the stresses of city living – particularly amid lockdowns – is certainly helping drive the over 50s and those in their 60s to appealing destinations such as Kenton on Sea, St Francis Bay, Port Alfred, Jeffreys Bay, the East Coast of East London and Gqeberha.

With house price inflation in the Eastern Cape region averaging 5.85% last year, outperforming the three major regions since the start of 2020, growth in prices continued to strengthen into 2021, which means that the region is leading the market recovery, says Sandra Gordon, Pam Golding Properties senior research analyst. She adds that the smaller towns within the Eastern Cape tend to have the larger percentage of homeowners who are retirees. (Statistics: Lightstone)

“Probably close to half our permanent population are retirees,” says Michael Wilmot, Pam Golding Properties area principal in the sought-after holiday destination of Kenton on Sea. “New buyers are buying now as a leisure getaway with plans to relocate here on retirement. They are mainly investing from approximately R1.5 million to R3.5 million, typically freestanding homes or homes in estates. The semigration market is also expanding for those who are still economically active.

“They are drawn by our friendly and caring community lifestyle where they can live in a safe environment with numerous recreational facilities such as golf, tennis, lawn bowls, river and beach water sports and activities, with game reserves right on our doorstep. There’s also a bridge club, birding and walking clubs, yoga and cycling groups, and internet connectivity is available, which is of particular importance for those who work from home – part-time or otherwise.”

Port Alfred, with its appealing Marina and village ambience, has always been a popular retirement destination with a consistent number of retirees moving into the area, says Isobel Meyer, the company’s area principal. “People in their mid-50s are planning and buying with retirement in mind, with the advantage that if they buy now, they can earn a good return on investment via either long or short-term rentals which are in healthy demand, and retire here later.

“Currently, such buyers are looking across the board for properties priced anywhere from R650 000 for sectional title units to R6 million Marina homes. They prioritise homes which offer good security and are located in close proximity to amenities. There is also a high demand for retirement villages with or without assisted living facilities and ideally priced between R850 000 and R2 million. Retirees are attracted to Port Alfred for a number of reasons, be it the lower cost of living, the peace and quiet away from the busier cities, or our lovely beaches and the Kowie River.

“We have a wide array of clubs and societies which offer an active social life and sense of community, such as the Royal Port Alfred Golf Course, Port Alfred and Kowie Bowls clubs, as well as fishing, tennis, running, walking and dance clubs – plus various other clubs and societies such as bridge, art, photography, bird watching, horse riding, croquet, squash, floral and garden, vintage car and Rotary, Round Table and Lions clubs. A broad range of medical facilities include the Port Alfred Hospital, clinic and various GPs and other medical practitioners, while East London, Gqeberha and Makhanda all offer private and public hospitals which are easily accessible to towns along this coastline.

“Port Alfred offers home buyers the opportunity to ‘escape’ the hustle and bustle of city life, with a sense of calm amidst the pandemic, and so appeals to those looking to change the pace of life down a gear or two and simplify their lives. Fortunately, our Covid numbers have been relatively low in comparison to the bigger metro areas.”

Adds Meyer: “Across the market in general we experience a high demand for properties which offer the potential to generate additional income by means of a separate flat or bedsitter, which are often tenanted by working singles, young couples and mostly students from either the 43 Air School or Stenden University. While coastal semigration forms a large part of our buyer pool, and specifically as a result of Covid, there has definitely been an increase in the number of individuals looking to buy here with a view to fast-tracking early retirement and work from home.

“This area still offers exceptional value for money to home buyers, with entry-level sectional title units starting from R500 000 for a two-bedroom, one-bathroom unit with a carport, and entry-level freehold units from R680 000 for a two-bedroom, one-bathroom semi-detached with a carport. Our larger family homes start from about R1.25 million for a three or four-bedroom home with two bathrooms and single or double garaging, while secure, freehold estate living can be had from R1.65 million to R32 million, depending on the size and location.”

St Francis Bay, with its winding canals, numerous waterfront homes and golf estate, St Francis Links, is also a magnet for home buyers, including retirees, says Pam Golding Properties area principal Richard Arderne. “A warm, close-knit community, this is already home to a number of retirees, including those who have relocated for partial retirement and may work from home.

“They like the security offered by St Francis Links, and generally the idyllic but active lifestyle with golf, boating, fishing, surfing, paddling, MTB and other activities on their doorstep such as walks, birding, bowls and bridge. Some may acquire a home with a separate cottage which can be rented out.

“Good news for those looking to retire to this area or just looking for a well-priced home is a new development in the pipeline, Homestead Views Security Estate, with units well-priced with two and three-bedroom apartments selling from R999 000 and one, two and three-bedroom houses selling from R1.399 million (including VAT, with no transfer costs).

Meanwhile in renowned surfing spot Jeffreys Bay, Pam Golding Properties manager Jaco Bothma says while traditionally a retirement town, more people in general are moving into the town – including those acquiring a leisure home to retire to in the future. “Retirees look in areas like Wavecrest and Eden Glen retirement village in the price range from R1.8 million to R2.5 million, with the construction of a new hospital which is underway a major drawcard for this sector of the market, which will certainly further increase demand. It’s also just an hour’s drive to Gqeberha airport and other medical facilities, while popular local leisure activities include surfing, golf, hiking, mountain biking and fishing.”

Sean Coetzee, the company’s area principal in East London, says the city’s East Coast is a unique area which is progressively morphing from a once sleepy holiday resort to a thriving lifestyle suburb of East London. “Gated coastal estates are now firmly established in the area with many having already sold 80% of their stands. The latest addition to the area is Olivewood Private Golf Estate, which is now also in the process of launching its retirement village, where stands are selling from R318 000 and houses from R1.572 million.

“Positively, the number of new families moving to the East Coast has also fuelled the growth of many new local businesses in the area as well as several newly-opened schools. The increase in local businesses in the area has reduced the need to travel to East London for essential services, thereby making the area more attractive to retirees wishing to relocate from the city to a more relaxed lifestyle.”

With several hospitals, Gqeberha’s retirement villages mostly have long waiting lists, says Pam Golding Properties area principal, Justin Kreusch. “There is certainly a great shortage of retirement developments, with the ‘sweet spot’ for this market probably between R700 000 and R1.2 million. Popular facilities among those looking to buy into a retirement village tend to include a clubhouse or community centre for socialising, especially where units are smaller in terms of living space.

Says Kreusch: “Generally, across the property marketplace, in terms of freestanding accommodation, we find retirees seeking homes under R1.5 million, which would fetch a two or three-bedroom townhouse, and you can also even acquire a two-bedroom unit for under R1 million. As far as houses go properties under R2 million are still readily available, with a minimum of three bedrooms and often four, a large garden and a pool.”