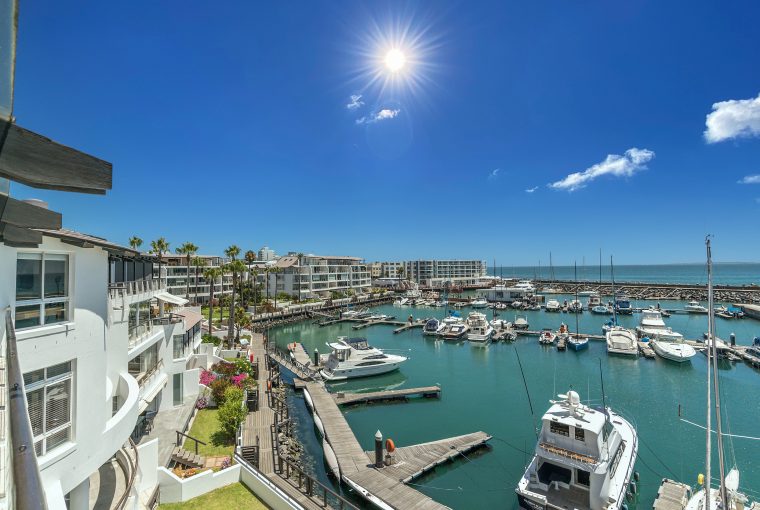 This ideally positioned, luxury penthouse in renowned Waterclub in Mouille Point, Cape Town, has just been sold for R39 million by Pam Golding Properties to a buyer from Finland. With unobstructed views of the sea, marina and Table Mountain, ownership of the spacious two-bedroom penthouse includes access to a private clubhouse on the water, award winning gardens, swimming pool, good security, an estate manager on site and scenic walks along the paths inside the estate, which is only 10m from the water’s edge.

Top-end sales of luxury homes on the Cape’s sought-after Atlantic Seaboard are flying high, with Pam Golding Properties reporting more unit sales over R20 million on this prestigious coastline in recent months than the whole of last year (2021).

Says Dr Andrew Golding, chief executive of the Pam Golding Property group: “Despite the traditionally slower winter market we are achieving some of our best-selling months on this prime coastal stretch of real estate.”

Basil Moraitis, regional head for the company in the Western Cape says it is well documented that the luxury market on the Atlantic Seaboard peaked in the summer of 2017, with the years that followed seeing a consolidation in pricing. “However, Covid acted as a significant disruptor and reset expectations, especially at the top-end of the market. 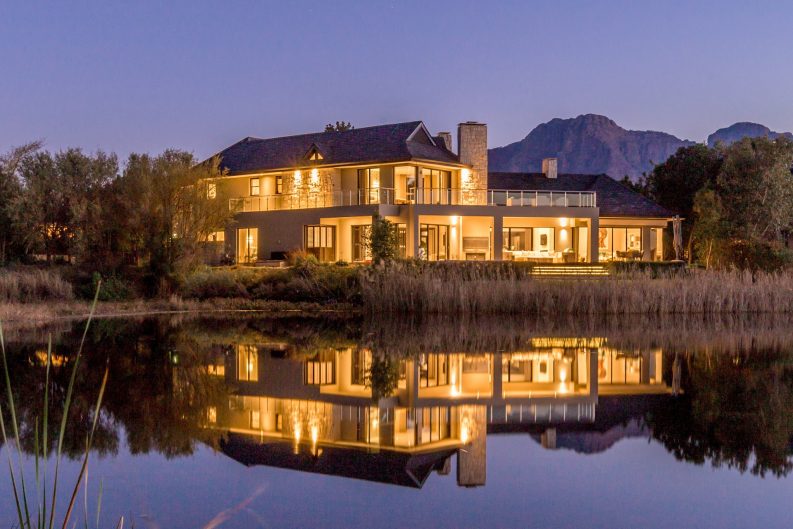 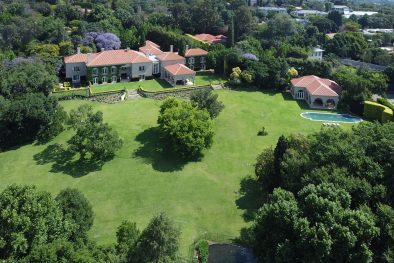 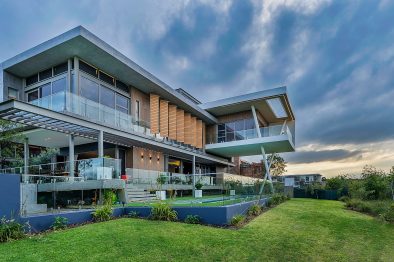 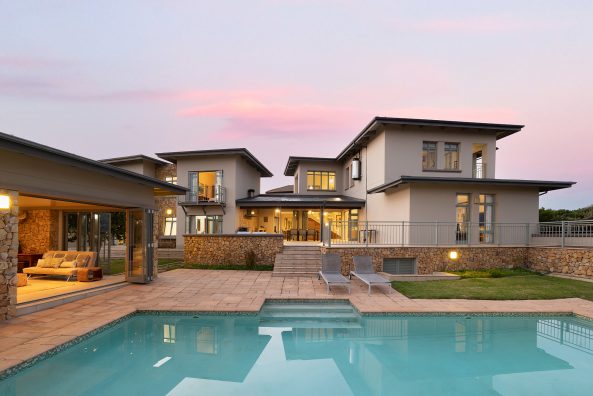 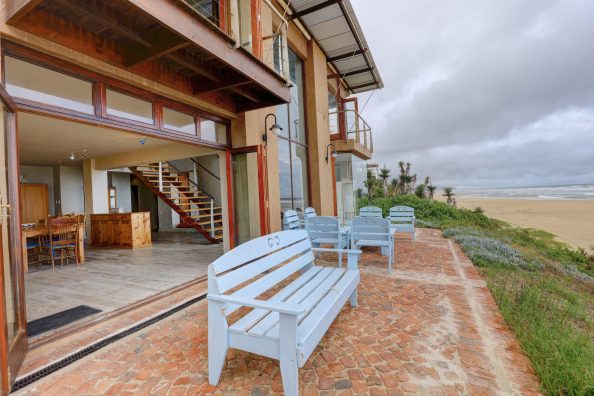 “During the following two years we saw a significant increase in demand for luxury property as buyers reconsidered their priorities following the pandemic and actively looked for sought-after lifestyle properties. This has resulted in a reduction of properties for sale in this segment, which is actively driving pricing expectations and resulting in competitive offers by buyers at the top-end. Notably, this is the first time I’ve seen this in the Clifton market.

“An excellent example of this trend is the Camps Bay market which had a median selling price of R10 million for full title property in 2020. This increased to R12.2 million in 2021 and to R15.2 million for the first four months of this year.”

Moraitis says the buoyant trend in the luxury market is evident across all top-end suburbs throughout the Cape Metro from the Atlantic Seaboard extending into the Southern Suburbs and the South Peninsula.

Says Moraitis: “In Clifton, such is the demand and lack of supply that we recently saw three top-end homes sell literally within days of listing. Two of the sales had competing offers, while a Fourth Beach property was sold on the day of listing to a local buyer for R22.5 million.

“There are definitely more transactions being concluded and more buyers in the market, especially those from international destinations who are again interested in South African real estate, particularly German buyers who are now more prevalent than at any time during the previous seven years, while many local buyers are purchasing to upgrade. The most sought-after locations are on the Atlantic Seaboard, especially Clifton, Camps Bay, Bantry Bay, Mouille Point and the V&A Waterfront, as well as Constantia and Bishopscourt in the Southern Suburbs and Simonstown on the South Peninsula – where we recently achieved a record sale for the area of R19 million to a UK-based buyer. The previous highest price in Simonstown was R14 million. High-end residential sales in Constantia include transactions for R19 million, R19.995 million, R20 million and R26.5 million – all to South African buyers.”

Other notable sales by Pam Golding Properties in these areas include in Clifton: an entire block on the seaside of the road with beach access in Clifton purchased by a local buyer for R80 million, and residences sold for R37 million to a buyer from Jersey (the largest of the Channel Islands), and two Fourth Beach homes sold for R24.5 million and R24 million respectively to local buyers. In Mouille Point a penthouse apartment in renowned Waterclub was sold for R39 million to a buyer from Finalnd and an apartment was sold for R30.4 million by Pam Golding Properties to a local buyer, while in Camps Bay, where there is a high incidence of international buyers, residential properties sold included R26 million for a property purchased by a Swedish client and R24 million and R23 million acquisitions made by German buyers.

Adds Moraitis: “Lifestyle is the key consideration for these high-end buyers of luxury property. Securing a unique property, be it an apartment on the beach, penthouse or exceptional view property, is the main consideration, and in many instances, Covid accelerated buyers’ long-term plans. There is no doubt that South Africa offers outstanding value, with comparable properties in other sought-after destinations often priced at multiples of what you pay here. The increasing international demand underscores this trend.

“The prospects for the Atlantic Seaboard luxury market for the rest of the year are positive. We also believe that activity and demand in top-end security estates in the Western Cape will continue. For example, there are numerous development sales in areas like Constantia which offer families a great lifestyle.”

According to Lightstone statistics, during 2021 a total of 984 homes valued at R10 million+ were sold in South Africa, the highest number recorded in recent years. 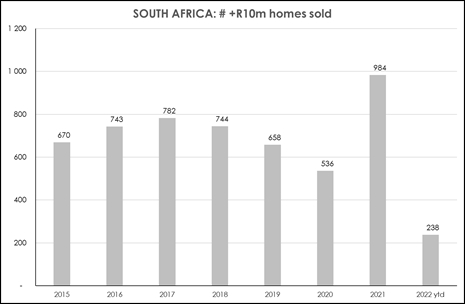 Says Dr Golding: “Hypothetically, if unit sales in 2020 and 2021 were combined and split evenly between the two years to compensate for the impact of the lockdown and subsequent rebound in activity, sales activity in the luxury (R10 million+) market remains buoyant by recent standards. “More homes in the R10 million+ price segment were sold in the Western Cape than in any other province, accounting for an average of 60% over the past four years, and 63% of sales in 2021 amidst an influx of semigrants to the province. 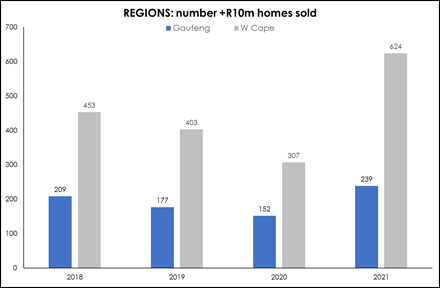 “These Western Cape sales were 54.8% higher than pre-Covid levels in 2019, while Gauteng sales in the same segment were 35% higher. Although accounting for just 1.4% of R10 million+ sales last year, the Eastern Cape has seen a noticeable increase in luxury sales over the past four years, with no slowdown evident, while R10 million+ sales in KwaZulu-Natal surged dramatically in 2021.” 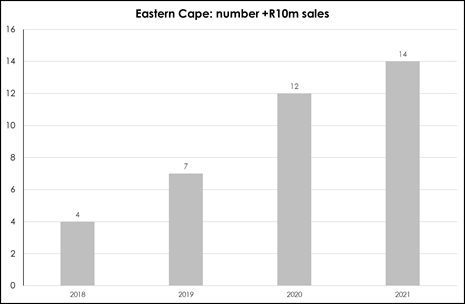 Annien Borg, who heads up the Boland and Overberg regions of the Western Cape for Pam Golding Properties, reports that desirable high-end locations include Stellenbosch, Somerset West, Durbanville, Hermanus and Paarl, with properties in luxury, lifestyle estates like Val de Vie and Pearl Valley very popular as they offer a wide range of amenities and activities within a secure environment. Says Borg: “Some of our notable sales in Val de Vie include transactions for R15.5 million and R12.9 million concluded with South African buyers, while a German buyer has made an investment of over R23 million in a home and three vacant plots.

“There has been an uptick in enquiries for luxury properties from abroad, however stock is low so when a well-priced property comes onto the market it sells quickly. A good example of this is a Durbanville home which drew three offers and sold for the full asking price of R11 million. We also note more buyers considering moving to areas like the Whale Coast due to the work-from-home opportunities created by Covid. Luxury properties on the Hermanus seafront, the iconic value and perception of the property, and location play a big part in buyer decisions.”

In Steyn City in Fourways, Gauteng, Pam Golding Properties’ Lambert Bezuidenhout highlights some recent noteworthy sales – a penthouse which sold for the full asking price of R32 million and a full title, free-standing home for R50 million. “Estate living and everything that it entails is still the lifestyle of choice for the very high-end buyers in Gauteng,” says Bezuidenhout. “In other words, a wide-ranging offering of quality, space, multiple amenities like golf, equestrian, cycling, walking, running, schools, restaurants and convenience shopping. For inland areas it would appear as if the ‘lagoon concept’ like the one in Steyn city, has become an appealing drawcard for home buyers, especially during the long summer months on the highveld.”

Also in Gauteng, Jason Shaw, Pam Golding Properties area manager based in Hyde Park, says high demand top-end locations include Hyde Park, Sandhurst, Bryanston, Westcliff, Parkwood and Saxonwold, with recent high-end sales by the company including those for R43.5 million, R35 million, two R30 million sales, R21 million and R17.5 million in Sandhurst, and R19 million in Westcliff, among others. “The luxury gated estate market continues to perform, while a notable trend is a significant uptick in buyers from the rest of the African continent entering the South African residential property market, mostly for primary residence but also for partial use,” says Shaw.

Pam Golding Properties Knysna and Plettenberg Bay area manager, Gordon Shutte, says sales in the luxury residential market above R10 million remain robust. “A recent notable sale was in the gated estate of Whale Rock Ridge in Plettenberg Bay for close to the asking price of R22 million, despite being still under construction and requiring an additional amount of about R8 million to complete. The buyers were from Gauteng, which is a regular profile of buyer in our coastal towns at present. The 800sqm+, five-bedroom home is a renowned Kate Otten design with flawless craftsmanship, every luxury imaginable and set in prime front row with 270-degree views across Formosa Bay.”

Also on the Garden Route, the company’s area manager for the George area, Stephen Murray, reports a number of high-end sales in the R10 million+ price band including homes sold for R20.4 million and R11.2 million in Fancourt, and a beachfront home and a lagoon front residence both in Wilderness, which were purchased for R14.5 million and R12.995 million respectively.

Says Murray: “Apart from prestigious Fancourt, other sought-after properties are those positioned on the water’s edge or in prime position within a gated estate – and often achieving full asking price. As these kinds of top-end luxury properties are often discreetly marketed, we advise buyers to contact us as we have hyper-local knowledge of property trends and prices and may well have that iconic property or perfect home available for purchase.”